What is it about?

When we talk about a nuclear power plant, we immediately think of ionizing radiation emitted by radioactive products. The radioactive source is external to the body and the exposure is said to be “external”: this phenomenon is called irradiation. But radioelements in the form of particles can enter the body and produce an exposure called “internal”: this is called contamination.

The different types of radiation

Exposure to radiation is called irradiation. The source of radiation is not necessarily in contact with the individual. Irradiation ceases when the source is turned off or moved away. This is the case for medical imaging or radiotherapy. The impact depends on the dose received and the extent of the area concerned. In case of high radiation, skin burns appear, vomiting and bone marrow damage leading to the collapse of the immune system.

It is the result of the incorporation and retention of a radionuclide inside the body. This contamination can be external by deposition of the radioactive substance on surfaces and/or the skin, or internal, most frequently by inhalation or ingestion.  The incorporated radionuclide is transported to various organs such as the bone marrow or the thyroid gland, where it continues to emit its radiation until it is eliminated or decayed.

The ionization caused by radiation acts mainly on the DNA of cell nuclei. When the DNA repair systems are overwhelmed, the cell dies. Otherwise, mutations may appear, allowing abnormal cells to proliferate, causing cancer or leukemia. Certain organs such as the gonads are very sensitive and a reduction in fertility can occur. The nature of the radiation is also important, for example, within the body, alpha rays are 20 times more toxic than gamma photons at the same energy level.

It is obvious that exposure to ionizing radiation is the greatest danger when working with radioactive substances. However, in a nuclear power plant, maintenance work must be carried out constantly. In addition to maintenance operations, decommissioning operations of the plants are underway (currently, 9 nuclear reactors are being dismantled in France and 14 reactors will be shut down by 2035).

Whether for maintenance or dismantling, these operations involve risks such as

– inhalation of radioactive dust, with consequences in terms of internal irradiation

– inhalation of silica particles or even asbestos, especially in the case of deconstruction

– exposure to liquid or vaporous chemicals such as sulfuric and nitric acids, or sodium hydroxide;

– exposure to water or other products contaminated by radioactivity.

We are therefore in a situation of risks combining radioactivity, liquid and vapor chemicals and asbestos for which the wearing of personal protective equipment is mandatory.

Of course, the current suits do not have any action against ionizing rays per se, but they are intended to protect against the risks of radioactive contamination and chemical products. They must cover the entire body, including the head, and must be complemented by respiratory protection.

The suits traditionally used are waterproof suits with anti-particulate function and/or protection against liquid splashes only. Moreover, they do not protect against vapors and aerosols. They are too hot to wear and do not allow for long periods of work on site. They can only be used in low risk conditions.

In more risky situations, suits are used. They provide effective protection against dust, asbestos-type particles and radioactive particles, but they have the major disadvantage of taking up too much space and/or the logistics of connecting them, which makes it impossible to use them in confined spaces.

Using a airtight suit may seem intellectually appealing but it has a number of disadvantages including major discomfort, especially in hot weather, due to very poor thermal regulation, as perspiration remains trapped inside the garment. The problem is solved when the garment is made of an air-permeable material that allows water vapor to pass from the inside to the outside. A layer of activated carbon traps toxic vapors from the outside, while the water-repellent effect of the outer fabric prevents cross-contamination reactions.

The notion of pumping effect is also very important: in the case of a completely airtight suit, the movements of the textile when the wearer moves, necessarily involve the entry of air at the interfaces, the toxic substances being then distributed under the surface of clothing. In the case of air-permeable textiles, movement also causes air to enter the garment, but this time the air penetrates the entire surface and not just the interfaces as a result of overpressure at a given point. If any toxic product has penetrated, it is immediately recaptured by the activated carbons of the filtering lining. 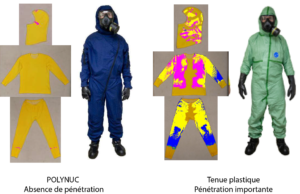 The Polynuc suit from Ouvry®.

Labelled by the Nuclear Valley competitiveness cluster, Ouvry has developed this “Polynuc” suit. The material used is a complex designed to block external liquid and particulate penetration thanks to the outer fabric, and vapors and aerosols thanks to the filtering media, while allowing internal flows (sweat, heat, etc.) to pass.

In addition, it is environmentally friendly thanks to a technological brick on the fluorine-free or limited content textile primers, to meet the constraints of halogenated waste management. Because it is worn longer, it requires far fewer changes among operators. Add to this the fact that the suit is washable and you can imagine the advantages of such PPE.

This outfit alone is effective against the various hazards present in nuclear power plants. It protects against liquids, vapors, aerosols, particles, while allowing a comfortable work without thermal stress. It is washable, environmentally friendly when destroyed and allows for better staff turnover.