First-aid workers may need to quickly identify the contents of a chemical and/or biological product spread on a surface in order to take appropriate protective and decontamination measures. This is the case, for example, of a white powder contained in an envelope.

There are a number of systems on the market that are based on different principles and which sensitivity and specificity are not all equivalents.

The simplest systems detect only the presence of protein; others, based on immunological reactions, identify the product very precisely. The most efficient tests are based on the principle of PCR (Polymerase Chain Reaction). Of course, the costs are low for a simple product and much higher for more technical products.

The suspicious powders most often encountered are of different kinds:

Very simple, these systems are able to detect proteins using a colored indicator that changes color in their presence. A swab, for example, is used to take a sample and insert it into a reagent tube. The reaction time is short, usually 1 to 5 minutes.

Adenosine triphosphate is a metabolite characteristic of living cells and its amount is proportional to the number of cells. The sample must be prepared for field measurements with a minimum of preparation. The cells must be lysed to release ATP. A filter allows the sample to be concentrated (PROFILE® 1). The enzymatic system consists of the substrate (luciferin) hydrolyzed by the enzyme (luciferase) in the presence of ATP and O2. The reaction produces light which is measured by a transportable micro-luminometer. Since the Bacillus spores contain very little DNA, it is necessary to make them germinate for at least 15 minutes on a culture medium. On the other hand, there will be false positives with powder containing live cells such as yeasts or spores of Bacillus thuringiensis contained in insecticides. Of course, neither ricin nor toxins will give a signal because they are not living cells.

Systems are able to detect DNA (or double-stranded RNA) by means of a fluorescent dye specifically attached to it. Prime Alert® requires a minimum of preparation but needs a microfluorometer and a calibration range.

It is a spectroscopic method initially used to quickly identify the chemical composition of an unknown product. The resulting protein spectrum is compared with those of a database. TruDefender® FT and FTi is a portable device capable of communicating with the database. The system is not suitable for identifying biological agents.

They reveal a large quantity of biological and organic materials. However, under no circumstances do they confirm the presence of a threat agent. Their specificity is relatively low, resulting in the presence of a large number of false negatives. On the other hand, they are very useful as a screening tool when there are many different materials to test. However, they require confirmation by more specific tests. The proteins detected are present in all cells (anthrax, human cells, non-pathogenic bacteria) and in common consumer products such as infant milk.

The simplest tests are based on a nitrocellulose strip chromatography system with naked eye reading.

The sample containing the agent of the threat, is put in contact with specific antibodies marked with a dye. A chromatographic migration in a buffer moves the whole on the nitrocellulose strip towards an area where antibodies corresponding to the agent are attached. They will therefore bind to it by producing a colored band since they have taken with them the marked antibodies. The migration continues and the antibodies marked in excess will bind themselves a little further on antibody antibodies deposited on cellulose nitrate, producing a second coloured zone called control. 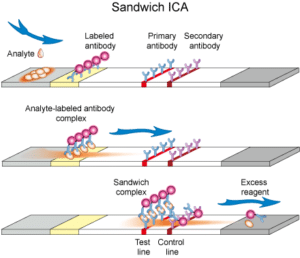 On the first line, called “test”, the targeted product is bound to the labeled antibodies. On the second “control” line, the antibodies marked in excess are bound. The positivity of this control line is important because it shows that the different actors of the reaction: antigen (threatening agent) and their antibodies are in the right proportions.

A positive test is therefore characterized by the presence of a colored test line AND the colored control line.

The different systems available on the market differ according to the agents sought, the sensitivity (smaller quantity detected), the specificity (false positive or false negative) and the sampling system.

The iMass system marketed by Ouvry comes in the form of a tube containing 8 strips that detects the following most frequently observed threats:

The sampling is unique for all 8 bands and the migration time is 2 to 15 minutes. Reading is done with the naked eye.

There are other systems like Alexeter Technologies’ RAID 5 and RAID 8 which contain 5 and 8 tests respectively. Tetracore, Inc.’s BioThreat Alert® Test Strips system can detect 9 agents but on separate strips. For this product, an optical reader makes it possible to optimize the interpretation. Pro StripsTM from AdVnt Biotechnologies, LLC detects 5 agents on the same plate. SmartTM -II from New Horizons Diagnostics, Inc. detects 6 agents separately. NIDS® from ANP Technologies, Inc. can detect 3,4 or 5 agents depending on the system configuration.

Rapid Analyte Measurement Platform (RAMP®) detects 4 agents whose smallpox is also based on a chromatographic system but the colored agents are fluorescent, which necessarily implies the use of a reader. CANARY® Zephyr from PathSensors, Inc. is based on a cell immunoassay system. It uses immunocompetent B lypmphocytes, specific to the agents of the threat. The binding agent on specific B-cell receptors triggers the release of light by a bioluminescent protein inside the cell. This system requires complex equipment, including a fluorescence reader, a microcomputer, and a microcentrifuge.

Performing a quick test in the field is not an easy task: taking samples, starting the reaction, leaving time for the reaction, reading the final result. These different steps are not easy to carry out, especially when equipped with a PPE. In addition, great care must be taken when interpreting.

On the market, there are a large number of systems that can be used in the field and are capable of quickly identifying threat agents. They are characterized by their sensitivity and specificity. It is also necessary to take into account the way in which sampling is carried out, the identification capabilities of the various media or powders often used for their dispersion and reading, either with the naked eye or using an optical reader. It is also obvious that prices depend on the number of agents detected at the same time and whether or not a reading device is used, the technology used…

This reminds me of a student’s remark in the presence of a suspicious white powder that he was asked to analyze:”It’s not anthrax because the powder is white ” Be suspicious of appearances!