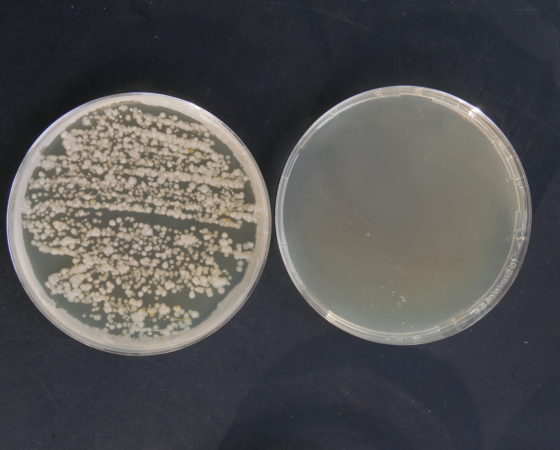 A glance at history

The remarkable conservation of the Egyptian artificial mummies is due to the fact that they were prepared with natron and essential oils with antibacterial properties. By preventing bacteria from developing these products allowed a remarkable preservation of mummified bodies.

Disinfection is the action of mechanically, physically, or chemically destroying microbes in a non-living inert medium: soil, instruments, etc.
Disinfection is a process which objective is well defined: it is directed and aims to eliminate the danger associated with the presence of certain germs. Its purpose is to reduce the number of microorganisms to a level where the risk of transmitting an infection can be eliminated in a particular application. For example, pool water is disinfected when there is no infectious risk with less than 100 germs / mL and the absence in 100 mL of fecal germs – faecal coliforms – or pathogenic Staphylococci.

Sterilization is an operation that aims to destroy all the micro-organisms of an object in a sustainable way. It is used in the kitchen (canned), medicine (tools, surgical drapes …) and the pharmaceutical industry (drugs). The goal of sterilization is twofold: to eliminate microorganisms and prevent possible contamination. There are two main forms of sterilization: dry heat sterilization (Bunsen burner, oven) or moist heat (autoclave, pasteurization, tyndallization) and filtration.

An antiseptic (on the skin) or disinfectant (on inert material) is a product that can suppress or prevent the development of bacteria or viruses. Antiseptics and disinfectants are able to inhibit the growth of microorganisms (bacteriostasis, fungistasis, virustasis), or to have a lethal action (bactericidal, fungicidal, virucidal, sporicidal). Some antiseptics and disinfectants have these two modes of action depending on the doses applied. Others always have a lethal action or always a bacteriostatic or fungistatic action whatever the concentration used.

An antibiotic is a substance that acts on a bacterium to prevent its development or to destroy it. The antibiotic acts on a specific target of the bacterium (membrane, wall, enzymes, DNA …) and that is why, when the bacterium modifies the target, it is no longer sensitive to the antibiotic, we say that it is resistant. On the other hand, an antiseptic or a disinfectant (united under the term of biocide) always act on several targets simultaneously making difficult the capacity of the bacterium to modify several targets in order to express a phenomenon of resistance.
Antibiotics and antiseptics belong to the medical field and we will not talk about it here.

In the medical field

The use of disinfectant products will be useful in the medical field (patient room to eliminate resistant flora such as Clostridium difficile, Pseudomonas aeruginosa, ambulances, medical practices, non-sterilizable equipment …)

In a veterinary environment

In the civil domain

As part of a biological threat

Disinfection eliminates dangerous germs spread voluntarily. For example, in 2001, the US Postal Center at the Department of Justice in Landover, Maryland, was contaminated with Bacillus anthracis spores as a result of bioterrorist attacks with spores in mail envelopes. The offices were closed for 4 1/2 months to achieve total disinfection. The cost of decontaminating all contaminated infrastructure is estimated at $ 320 million.

The properties of a good antiseptic

A good antiseptic must have a spectrum of activity adapted to the objectives set. Its action must be rapid, it must be active in the presence of interfering substances (blood, pus …), have a prolonged effect and not attack the equipment. Non-toxic to the staff, it must be easy to use, do not leave an unpleasant odor and must be stable.

Each set has a known action spectrum, none of them is able to act alone on all Gram-positive, gram-negative, Mycobacterium, yeast, mold, naked virus, microorganisms (bacteria) enveloped viruses and spores.

Often two components are combined in order to obtain a synergistic effect.

Spectrum of action of the main disinfectants

Their action is characterized by the “Decimal reduction time = time required to reduce a log of the initial population”. This value is constant, it will take all the less time antiseptic to eliminate germs if they are fewer in the beginning. It is therefore preferable, when possible, to clean the surface to be disinfected beforehand. This is done by means of a detergent capable of solubilizing organic matter. The most used agents are quaternary ammoniums such as benzalkonium chloride. The use of a detergent-disinfectant mixture makes it possible to obtain a powerful combined activity.

The DesDec product we sell is a mixture of quaternary ammonium and hydrogen peroxide.

These are cationic surfactants. They bind to the negative groups of the surface of the bacterial cell, modifying the membrane permeability which causes the loss of cellular compounds.
They also inhibit enzymatic proteins, denature lipoproteins, and destructure the spatial conformation of proteins. Lethal action is therefore multifactorial.

On bacteria, its mechanism of action consists in oxidizing the sulfhydryl groups and the double bonds of the enzymatic proteins of the bacteria. This causes a modification of their conformation and the loss of their function which leads to cell death. On viruses, the capsid proteins are denatured allowing access to the genetic material of the virus. On the spores, peroxide can carry its oxidizing power on the disorganization of dipicolinic acid, the molecule responsible for the extraordinary resistance capabilities of these structures.

In the form R2D2 it is a powerful disinfectant used in the context of DSVA (surface decontamination by air). With its nebulizer, the product-device pair is certified NFT 72-281. The disinfectant is dispersed in the air in the form of droplets, they are deposited on the surfaces and exert their disinfecting action. It is particularly effective, destroying 7 logs of Bacillus spores in 15 minutes.

In the form of R2D4, of course, it retains its ability to disinfect micro-organisms (bacteria, fungi, bacterial spores, viruses and prions), but it is also capable of deodorizing Volatile Organic Compounds (VOCs) and also of decontaminating industrial products,  toxics and chemical warfare agents. It can be vectorized by aerosol, spray or foam, depending on the media to be decontaminated by the use of a nebulizer, a sprayer or a foamer. Chemicals (chemical warfare agents, TICs) are destroyed by hydrolysis reactions, nucleophilic substitutions and / or oxidation: the destruction of chemical warfare agents is greater than 98% in 15 minutes.

The disinfectant cleaning aspect in practice

We have established a simplified experimental protocol in order to show the disinfecting efficacy of DesDec R2D4 under real conditions of use.

Petri dishes of culture medium “trypticase soy agar” which allows the development of non-exigent germs have been prepared.
A first manipulation in an external environment was carried out.
The sample was taken with a swab on a metal plate located at ground level. This plate is very dirty because it regularly collects pigeon droppings. A swab was performed before spreading foam. The swab was then rubbed successively on 2 plates of culture medium. After 30 minutes, the foam having disappeared, a second swab was performed and 2 new boxes of culture medium inoculated.
An identical manipulation was carried out on a shelf located in an uninhabited cellar for many months and therefore particularly dusty. R2D4 was sprayed. The drying was complete after 30 minutes.
The plates inoculated before and after treatment were incubated for 48 h at room temperature. 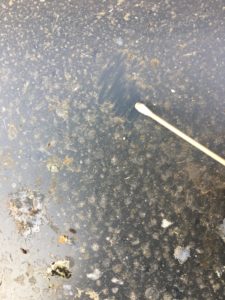 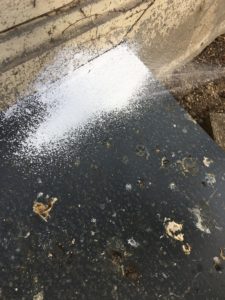 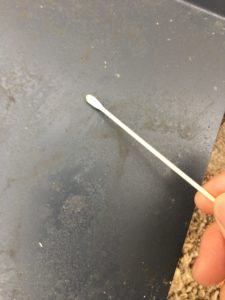 Sampling with a swab in an outdoor environment, spraying R2D4 foam and sampling after 30 minutes of drying the foam 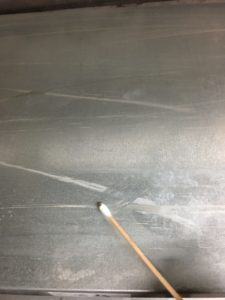 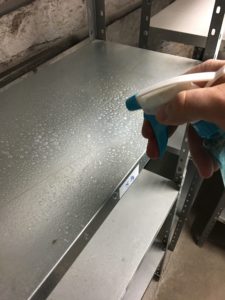 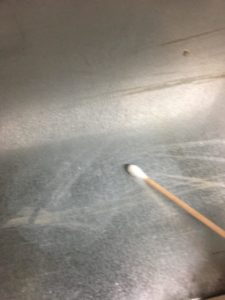 Sampling with swab in the interior, application of R2D4 in spray then sampling after 30 minutes of drying of the spray.

The boxes before treatment show a number of colonies uncountable for the supports located outside as well as inside. On the other hand, after the action of R2D4, the absence of any microbial culture is constant. 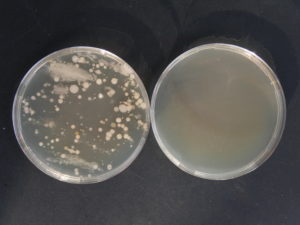 Appearance of petri dishes before and after R2D4 in outdoor environment 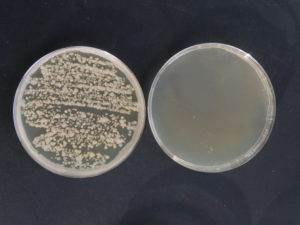 Appearance of petri dishes before and after R2D4 in indoor environments

The 2 supports were particularly dirty and no cleaning was performed before R2D4 disinfection. Nevertheless, the disinfection was very effective since none of the microorganisms resisted the action of the product. There was simultaneous cleaning and disinfection by joint action of the 2 components, quaternary ammonium and H2O2.

There are many applications such as disinfectant cleaning of sidewalks for example, public transport platforms, crime scenes, abandoned buildings …

In addition, the product with very little corrosive can be used on sensitive equipment (weapons, computers …). It is also non-toxic (no chlorine), biodegradable and environmentally friendly.

Do not forget that R2D4 is versatile since it is also very active on the degradation of chemicals, including chemical warfare agents. We will return to this point in another article.