We have had the opportunity on several occasions in this blog to talk about biological warfare. An interesting review has just been published on this subject and it is an opportunity for us to review our current knowledge of this BCRNE threat.

The first to use biological weapons was undoubtedly the Carthaginian general Hannibal, who, 200 years before Christ, had enemy ships launched clay pots filled with snakes on deck. The surprise effect was complete and the sailors had to fight against an additional enemy: reptiles.

The use of what could be called “macrobiology” was followed by that of “microbiology”, much more sneaky because of its appearance invisible to the naked eye. The invention of the catapult made it possible to send human excreta, or even whole bodies contaminated by the plague, as was the case with Djanisberg, throwing the bodies of pestifers over the walls of Jaffa besieged by the tatars in 1347 in order to drive the Genoese away. It is said that by going to sea they would have spread the plague throughout Europe in the form of the terrible “black plague” that decimated nearly half of the European population at the time. However, it is difficult to believe that it was the plague corpses that introduced the disease into the citadel, the plague being transmitted by rats and their fleas, certainly present in large numbers in the besieged city, cohabiting with the Genoese population. 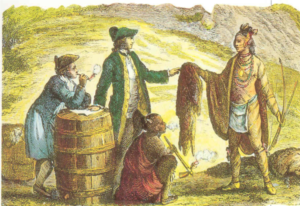 Another well-known fact is the distribution of smallpox contaminated blankets in 1764 to Indians around Fort Pitt by British General Amherst, with the aim of knowingly spreading the disease and eliminating them. The Indians were decimated and even if we continue to tell this story, the scientific reality is certainly quite different because infectious diseases were spreading rapidly at the time in a population that was immune to the diseases of the old continent.

Many other examples of this type could be cited here.

BW agents are living microorganisms (bacteria, viruses, fungi…) or toxins from microbes that cause disease or death in humans, animals or plants. Living microorganisms multiply in their hosts and if the disease is contagious it spreads to the whole susceptible population. As for toxins, they are inert but their toxic power is infinitely greater than that of chemical toxins. The apparent ability to produce and use infectious microorganisms means that many states or non-state groups have dreamed, or are still dreaming, of possessing a biological arsenal. Unfortunately for them, while more than 12,000 infectious agents are potentially usable, very few of them have the characteristics that allow them to be truly effective: high infectivity, high virulence, no treatment or vaccines available and, above all, an effective means of dissemination (militarization).  To this aspect of infectious disease spreading among the population, we now add the notions of biological weapons directed against crops, livestock, fish…, or even an anti-personnel weapon (recall of the Bulgarian umbrella). Insects can also be considered as biological weapons themselves. The panic generated by such a weapon must also be taken into consideration.

Characteristics of the biological weapon

High infectivity, high virulence, unavailability of vaccines;
A small quantity can produce great effects thanks to the multiplication of the germ in the population;
Small size for easy dissimulation and transport.
The agent must also be able to maintain its infectivity and virulence for a long period of time.
It should be remembered that a chemical or biological weapon is composed of a toxic agent and the appropriate means of dispersion (militarization). For biological weapons, the distribution and propagation control systems currently being developed do not allow them to be classified as weapons of mass destruction (WMD) but rather as weapons of mass disruption.

The use of genetic tools can lead to the creation of new germs; this is called “genetic biological warfare”. It would be characterized by the following effects: make vaccines ineffective by modifying the antigens used for immunization, make bacteria resistant to all antibiotics or viruses resistant to all antivirals, artificially increase the virulence of a microbe, make an avirulent germ pathogenic, increase the transmissibility of a germ so that infection spreads more easily in the population, modify the range of usual hosts of a germ to make it pathogenic in a host usually insensitive, make the germ undetectable and not identifiable with existing means. The main innovation in synthetic biology is undoubtedly the CRISPR/cas9 system, representing a kind of “black biology”. It makes it possible to produce deadly genetic material from viruses. We have already talked about what could be a real threat.

It is therefore more necessary than ever to work on detection systems, personal protective equipment, medical countermeasures such as the development of new antibiotics or vaccines.

It is necessary to know the common epidemiological indicators that may indicate a biological attack; the appearance of a disease caused by an uncommonly encountered germ, a genetically modified agent, abnormally high morbidity or mortality rates, the geographically or seasonally abnormal appearance of a known disease, an endemic disease whose cases would increase too significantly. Suspicious should also be considered cases of transmission that are generally rare, such as aerosols, food or water, or contamination by a known ventilation system that has never had any problems before, a rare disease affecting a large population or a particular age group.

The diagnosis of a biological attack will therefore be based on epidemiological, clinical and laboratory evidence. The means of detection and identification are currently the subject of intense research, which we will discuss in a future article.

An effective surveillance system must be put in place, involving the medical sector and in particular clinicians, health experts and veterinarians. One of the main problems is that, everywhere in the world, emerging infectious diseases of unknown origin can appear, which can, like any classic epidemic phenomenon, be confused with a terrorist attack. Early identification of the germ would help to quickly initiate appropriate prophylactic and antibiotic measures.

It can be produced quickly and at a moderate cost. Spread over a large area, it could lead to high morbidity and mortality, especially if transmission from one person to another is easy. One can imagine that the psychological devastation and panic would aggravate the purely infectious aspect.

Major military research organizations, such as Unit 731, have put a lot of resources into the subject of biological weapons with a large number of financial and human resources. Militarization leading to a weapon of mass destruction is very difficult, but various studies show that terrorist use is quite possible.

It is usual to say that the first world war was chemical, the second nuclear and the next…biological.