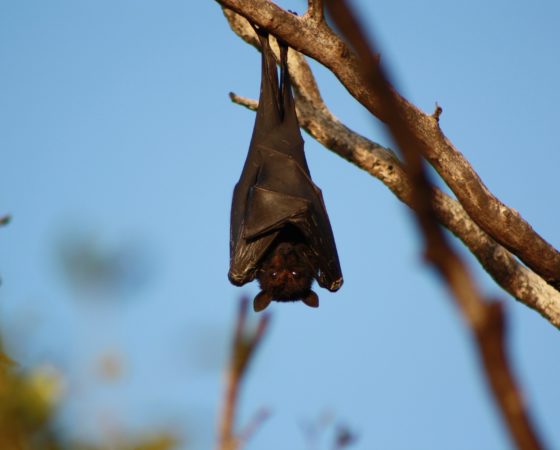 Strange animal that the bat is! The only flying mammal (the flying squirrel can only glide from one tree to another), it is guided by an echolocation system by emitting ultrasounds (12,000 to 100,000 hertz) that it recovers the echo in its ears. With a lifespan of 20 to 30 years, it lives on average 10 times longer than equivalent small rodents. Add to this list that it is capable of hosting a large number of deadly viruses such as rabies, Ebola, SARS, MERS, Nipah… without being sick itself.

So why this title? “Bats and war”?

Bats and the US Army

Animals have always been used in wartime: horses, mules, elephants, dogs, carrier pigeons transporting secret messages… The American army is not an exception with the education of dolphins to locate underwater bombs and the attempts to arm bats to turn them into flying bombs !

The story takes place in 1943, when American scientists tested the “X-ray project” to attach explosive charges to bats to set Japanese cities on fire, and more than a million bats were to be equipped and dropped from an aircraft over Osaka Bay. As the animal does not make a nest but lives in caves, attics, wall cracks… these “bat bombs” could cause several thousand fires within a radius of 70 km, destroying infrastructures while minimizing human losses…

The project turned short when two of these winged missiles escaped under a fuel tank at the Carlsbad airbase in New Mexico where the experiments were taking place. As military secrets prevented civilian firefighters from extinguishing the fire, the entire airbase was destroyed and the bat project was abandoned.

The fight against biological weapons

How can the bat now be used in the fight against biological weapons?

The findings are there: the bat lives a very long life (the oldest known bat died at the age of 41) and never suffers from cancer (the elephant is in the same case).

Telomeres are short DNA sequences that are repeated several thousand times and located at the ends of the chromosomes. They are functional protections against the effects of time and the environment. With each cell division cycle, the length of these structures decreases and thus reflects aging.

Let us remember “Dolly”, the cloned sheep: something had not worked in cloning and it aged prematurely because of its telomers much shorter than those of a sheep of the same age.

An enzyme, telomerase, is responsible for repairing the telomeres so that they keep their length: it, therefore, allows to “raise the biological clock”! This is why, for example, DHEA, which promotes telomerase activity, is opposed to the aging process, but this enzyme also has a major disadvantage because it can cause cancer.

In bats that live long without developing cancer, it is an association of DNA repair genes, telomere maintenance genes, and telomerase that keep telomeres in a long configuration.

Why does the bat coexist with the most pathogenic viruses on the planet?

When a foreign microorganism enters, it initiates a so-called “inflammatory” response. Cellular phenomena lead to phagocytosis and thus to the destruction of the micro-organism.

The problem is that this reaction, which releases chemical mediators such as interferons, can be exaggerated and have harmful consequences on the body by causing pathological phenomena such as autoimmune diseases for example, when it is not well controlled, thus contributing to the damage caused by infectious disease and also contributing to the ageing of the body.

In bats, it has been shown that this inflammatory reaction consists of 3 permanently active interferons. This barrier is always on alert and is not triggered on an ad hoc basis when viruses are introduced. The response is therefore very attenuated and does not have any secondary pathological effects as it is the case in humans.

When a virus is introduced into bats, a pre-existing antiviral defence route is precisely regulated, just enough to inhibit the virus without any harmful effects. There is a balance between bats and the pathogens they carry, but beware, the virus is kept alive in the animal, which then becomes a dangerous infectious reservoir, especially since the co-evolution of viruses and bats has most certainly modified the pathogenic power of viruses by making them more unsuitable for humans and therefore more redoubtable.

Now that we know more about the immune phenomena in bats, we can perhaps use them as a basis for developing a combination of drugs in humans that would aim to reduce the inflammatory response and also prevent the virus from multiplying, rather than trying to kill the virus too quickly with the morbid consequences we know.

Natural outbreaks of Marburg virus infection are infrequent, but the mortality rate of the virus is around 90%. The Soviets isolated an even more dangerous strain (variant U) isolated from the organs of Nilolai Ustinov (scientific leader) who died accidentally after involuntarily inoculating himself with a strain of Marburg virus previously intended for a guinea pig!

In the event of an attack with this virus, the bat super-immunity model applied to humans could perhaps prevent the spread of infection.

But, we are not there yet! Will the bat be able to redeem itself with the American army after their very bad experience in 1943?

Photo by Scott Murdoch from Burst